I’m not going to lie to you. It is absolutely true.

Not only is it more expensive than other cities in England (and the world), but Americans are always fighting an uphill battle with the exchange rate.

Because the exchange rate changes daily, I won’t take a guess on what it is the day you’re reading this, but let’s just say that the pound has always been worth more than the dollar since time began. 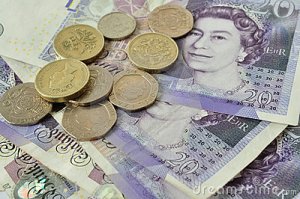 There are very few people who come to London with an unlimited budget (and good for them, but that’s not most of us).

The city is as expensive as you make it, and the great thing about London is that so many of its offerings are free.

Most of the major museums are free, the parks are (obviously) free, walking down Oxford Street and marvelling at all of the things you want is free (until you go inside Top Shop because you HAVE to have that dress).

There are always free events and festivals and exhibits going on, plus with so many students (foreign and British), student discounts are everywhere.

Before You Get Here

Practically, you’re going to need a way to have pounds when you first get here.

The easiest way is to check with your bank or local exchange places to exchange money, but you’re going to get really poor exchange rates in America, so don’t exchange too much (50 – 100 pounds would be more than enough).

To be honest, I never took my own advice and carried pounds into the country with me, as I always relied on ATMS in the airport, but this could very easily go wrong if you find your card doesn’t work at the airport ATM for any reason.)

Once you’ve got your emergency pounds, the next step is to figure out how you’ll access your money longer term.

Speak to your bank about how your card will work overseas (sorry, stating the obvious here). Ask about ATM fees, because a few American banks have agreements with certain UK banks that will waive ATM fees.

Again, I won’t list them as they can change often. If you’re abroad for 6 months +, it may be worth opening a new account with one of these banks, but if it’s shorter term program, it’s probably more hassle than it’s worth.

Before you leave, go online or call your bank to apply a travel notice so they won’t block your card while you’re out of the country.

I typically include all of Europe in my travel notice, but if your bank doesn’t give you the option, just make sure to let them know again if you are going traveling and will need to use your card.

So now you’ve called your bank, you have your emergency pounds, and you’re in London ready to have the adventure of a lifetime.

Don’t bring dollars to exchange (you’ll get a poor rate) or travellers checks (I’ve studied abroad 4 times and still have never seen anyone use one). Instead, go to an ATM and withdraw pounds from your American bank account.

Tip: When you’re withdrawing pounds, the ATM will ask you whether you would like to have this charged to your bank in pounds or dollars.

It’s tempting to choose dollars because that seems to make more sense, but this will usually give you a worse exchange rate and is just put there to trick you into being charged more. Always choose that you’d like to be charged in the local currency.

You’ll also need to consider how much you’ll withdraw at a time, based on how secure your dorm or flat is and how much you feel comfortable with.

The thing to avoid is taking out small amounts each time, as you’ll be hit with massive ATM fees. I take out about 100 pounds and keep most of it safe in my room while putting 20-30 pounds in my purse at any time.

This is down to personal preference and how you feel you manage your money best, but I like to do my best to make sure I’m not constantly paying money for the privilege of spending money, which is often how it can feel living in London.

Credit and debit card fraud happens in the UK just as it does in the US, but you may not be aware of it as easily in the UK as most of your expenses will be new and you’ll be spending quite a bit on flights, traveling, etc.

You might be tempted to skip this section  and move on to the next one if you’re of the “It won’t happen to me” mindset.

And, believe me, my default outlook on life is “No worries! It will all be fine! It won’t happen to me!” but, of course, this actually happened to me.

300 pounds (about 500 dollars at the time) was taken out of my bank in a debit card ATM transaction in central London.

The only reason I noticed was because I was going over my online transactions and realized that I wasn’t in central London that day.

To this day, I still don’t know how it happened, as I hadn’t used any sketchy looking websites or gone to any particularly sketchy areas, but the lesson was learned.

I was able to get my money back from my US bank after a few months, and while the whole process was emotionally taxing (um, hello, that was my 500 dollars, how could someone just take it?), it was fine in the end.

The usual “be careful with your cards” still applies, but just keep a closer eye on your account than you might normally.

The chances it will happen to you are definitely slim, but if it does happen, it’s better to know sooner so you can start gathering evidence that fraud has occurred and it was not, in fact, your own fault after a drunken night out where you thought it would be great to withdraw all of your earnings.

Traveling to London or the UK?

Moving to the UK?